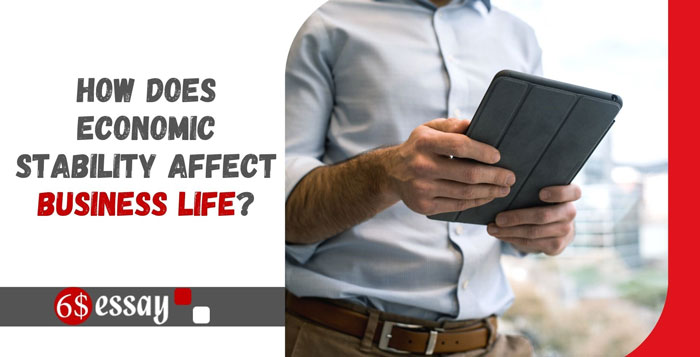 Economic conditions directly impact the businesses whether they are small or large scale businesses. When there are improvements in the economy, it typically gives birth to new business opportunities for the owners, on the other hand when there are hurdles, it can have a severely drastic affect and lasting negative impact. No matter what is the trend in the economy, it can directly severely affect the business and its operators.

Economic stability enables other macro-economic objectives to be achieved such as sustainable growth and stable prices. Creating a right environment for the balance of payments and job creation, economic stability creates a certainty in the market and encourages investment in the human capital and technology.

Impact of a Strong Economy on the Businesses

When the economy is strong, all kinds of businesses enjoy a greater level of prosperity and success. The unemployment rate is low, disposable income is high, and the consumer’s confidence prompt people to pump their money back into the market through the purchase of non-essential and essential goods and services.

The effect of the strong economy on business operations is a two-fold one, as the business operations increase, the requirement for the business to keep its pace with demand by expanding retail space, hiring additional employees, and adding new product lines also upsurge. While this strong economy impact is viewed as positive, the downside is that if the economy begins to weaken, business owners can find them strained resulting in business failures and mass layoffs.

Impact of a Slow Economy on the Businesses

Many business have to deal with a number of challenges and hurdles during economic slowdown. Consumers become concerned about their job stability and they more likely get cautious with the expenditures in return, leading to a decreased revenue for the business operators. A slow profit stream can make it tough for the business owners to repay the creditors, which can ultimately negatively impact their long-term feasibility of the business operations.

A business owner who faces financial struggles hardly qualifies for capital expenditures, operations, and loans limiting the business growth opportunities. Additionally, due to this downfall and crises, several business operators force to downsize their workforce during a slow economy. This can ultimately limit the aptitude to serve customers and contribute to the unemployment rate, which later slow down the economy even more.

Factors That Can Influence an Economy’s Stability

The economy includes all kinds of activities in a country which are concerned with the distribution, manufacturing, and use of the goods and services. Mainly, the economic climate can create a huge impact on the businesses. The level of investment decisions, consume spending and expenditures affect the prices, and the number of workers that business owners hire.

Additionally, the economic stability of a business depends on the business climate in four main ways which include the following:

This is one of the basic and most important aspects which runs the economy. It is a financial charge made by the government on the individuals and business owners that has a range of types. Some of them include income taxes, value-added taxes (VAT), National Insurance Contribution (NICs), and corporation taxes. These taxes are a major source for the government to make the revenues and tax proceeds.

Government utilize this money to render the traditional functions such as maintenance of the law and order, provision of good roads, regulation of the trade and business, and defense against the external aggression to ensure the economic and social maintenance.

Income is another main aspect that helps in running the economy. It is received either from the investment or work. The amount of income that an individual earns will influence how much they spend on their expenditures. If the consumer income increases, their general expenditures also tend to upsurge. An increase in the expenditure will assist the businesses in expanding, improving the economy, and lowering overall unemployment rate.

On the other hand, if the consumer income falls or declines, it can decrease the overall expenditures of an individual and can have an opposite effect. The latter condition will not let the business perform well due to which economy will be less stable and raise the unemployment level.

Being the third factor yet another chief factor of the economy, unemployment refers to individuals who are actively seeking employment but are unable to find work. Someone who does not have a job does not mean that they are jobless, some people just do not choose to work or operate because they are financially stable. Another reason could be that they may not have time to work as they have to manage their household chores or look after their family. While there may be many other reasons for not working, unemployment can affect the economy badly and means that the economy is not fully utilizing the workers that are available.

Due to unemployment, the economy does not grow as quickly as it should be which is why it may begin to slow down. This slump in economic activity will directly affect the businesses. Additionally, there is a national level of unemployment which is given in the form of a percentage which is aimed to be low so that the economy can flourish.

Interest rates represent the amount a saver receives in an interest which is the cost of borrowing money. It is stated as a percentage reflecting how much it is earned and paid in interest. Changes in the interest rate likely affect both the borrowers and savers.

The aforementioned factors can directly affect the stability of a business. Government takes care of the aspects discussed above in order to stabilize the economy as a whole for survival.

If you have a tough and challenging business assignment to compose, you can consult our business report writing experts today to get it done with quality and top-notch 100% original content.

Price Calculator
Disclaimer: Every order prepared by 6DollarEssay.net is solely for research purposes. Students are not allowed to submit the paper as it is to their college/universities. In case, the student submits the paper as it is, he/she will be solely responsible for it.